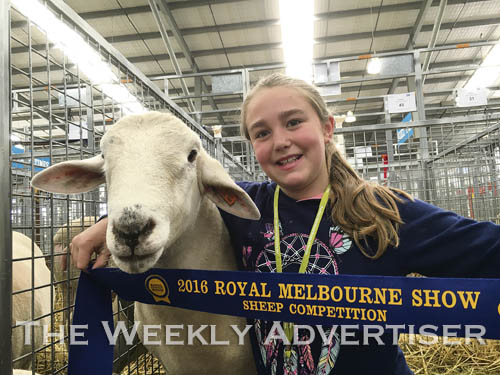 photo by The Weekly Advertiser

Published by The Weekly Advertiser

The team at Mallee Park Poll Dorset and White Suffolk Stud at Hopetoun won first place for a May-drop White Suffolk ram against strong competition at the Royal Melbourne Show.

Mallee Park’s Marianne and Tim Ferguson said tag number 359 had stood up well throughout the show season and displayed good White Suffolk style. Marianne said the ram scanned well for muscle at ‘54’ and was a well-balanced sheep. “White Suffolks are a recent addition to our farm and the genetics are from the renowned NSW Kurralea Stud,” she said.

For the first time in five years, Mallee Park prepared a woolly Poll Dorset ram  for the Melbourne show, and the addition to the team proved fruitful with a second placing. Mr Ferguson said Marianne had made the decision 12 months ago to enter a woolly ram.

“I have to admit, I was very reluctant knowing the work that goes into the animal to get it prepared for the show ring,” he said. “I handed Marianne the hand shears and left her to her own devices with the ram. “With some handy tips from other Poll Dorset breeders and in particular Jessica Southerland from Konongwootong Poll Dorsets  in Coleraine, Marianne whipped the ram into shape and came home with a second place for Mallee Park and Victoria.”

Mallee Park Poll Dorset Stud was founded in 1993. Mr Ferguson said facilities at the Royal Melbourne Show were arguably the best in Australia and sheep numbers continued to grow with more than 600 animals in a livestock pavilion. “The livestock pavilion is always buzzing with activity and attracts huge numbers through the door,” he said.

“Exhibitors often struggle to get their animals to the judging floor because they attract so much interest from the public who don’t get the opportunity to see farm animals so close. “The exhibitors are great, stopping and letting the kids have photos with the sheep and goats and we can tell the public really appreciate it.

“We are the link between the country and the city and it is really important that people can see where their food is coming from.”